National dwelling values bottomed out 8.4 per cent below their peak in June 2019, with the market since recovering 6.7 per cent.

While most recovery periods match the length of time it takes to go from peak to trough, Corelogic head of residential research Eliza Owen says Australia’s residential market would make a full nominal recovery by April, if growth rates continue at the January trajectory of 0.9 per cent growth per month.

“With record-high values expected across Australian dwellings in a few months’ time, 2020 will see the fastest market recovery on record with respect to the length of the downswing.”

Capital city auction activity ramped up with 1,122 homes taken to auction over the weekend, a number expected to further rise in the coming weeks, and almost double the amount of last week’s 625 auctions held.

Sydney was home to the busiest auction market with 428 auctions. The harbour city returned a preliminary auction clearance rate of 79.9 per cent, the highest preliminary result across the capital cities.

Melbourne was home to 401 auctions, with preliminary figures showing a 74 per cent success rate.

Canberra was the second highest preliminary clearance rate across the capital cities, at 77.8 per cent.

While in Brisbane only 36.4 per cent of homes sold at auction. 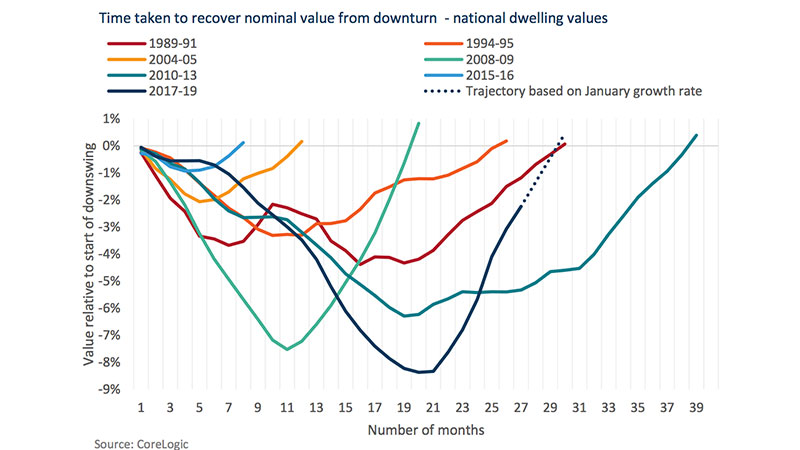 Owen says the table shows the number of months taken to get from peak to trough, and from trough to recovery throughout past cycles.

Following three rate cuts in 2019, the central bank has maintained the cash rate at the record low of 0.75 per cent since October.

“During the previous upswing from 2012-2017, the portion of new housing finance to owner occupiers, excluding refinancing, averaged 59.4 per cent based on the value of commitments,” Owens said.

Owen says this has risen to 71.4 per cent over the past seven months.

“It is worth noting that data on the latter is covering a relatively short period of time, and investor participation may increase over 2020,” Owens said.