Brisbane-based developer Gansons is planning a four tower medical precinct at a new business park in Bowen Hills on the fringes of the Brisbane CBD.

The developer has lodged a development application for a 12,611sq m site, located between 12 and 18 Thompson Street, set to feature one 14-storey tower and three 8-storey towers.

The first facility will house a 1,439sq m hospital and 8,382sq m of office space for health care services, research and technology, as well as a rooftop garden, solar panels and charging stations for electric vehicles.

Gansons said the private development will aim to provide public benefit in the post-coronavirus recovery, including to provide for health services, construction and employment.

“The recent and ongoing public health situation has highlighted the need for health care services in south-east Queensland, both now and into the future,” Gansons said in a statement.

“The development for new medical facilities and associated activities will improve the community’s access to a range of health care services to meet this need.” 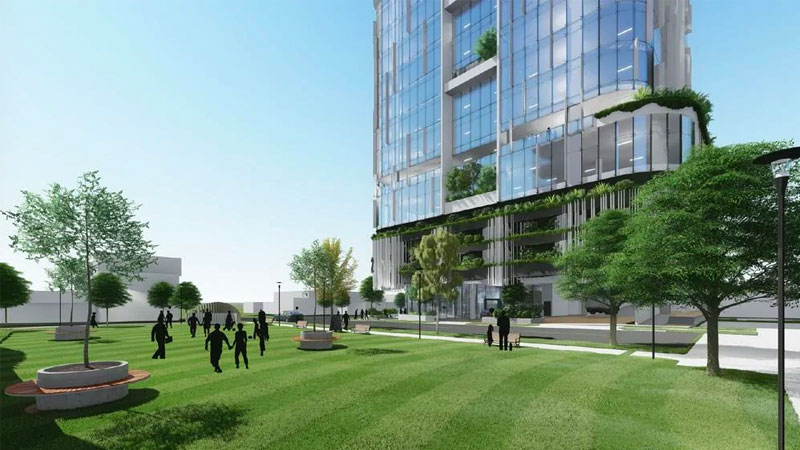 The push for medical-focused development has been evident over recent months with many businesses showing a willingness to respond to the pandemic.

The 9-storey commercial building will feature five levels of medical space as well as an ambulance bay and hospital-sized lifts.

Nearby, Barber Property Group has plans in front of council for a 15-storey private medical facility and hotel across 5,300sq m at 375 Wickham Terrace.

The Royal Rehabilitation Centre Sydney has also lodged plans for a $70 million modern rehabilitation and disability facility across a two-hectare site in the Sydney suburb of Ryde.

Dexus is also forging ahead with the construction of the North Shore Health Hub at St Leonards, the first stage in what the company hopes will one day expand to a $1 billion healthcare precinct, complete with a “medi-hotel” and build-to-rent housing for workers.

In Melbourne, investment house Australian Unity is also set to start construction on a $100 million medical facility in the city’s west, set to be the first private hospital for Sunshine.