Queensland could be just weeks away from securing the 2032 Olympics after the International Olympic Committee executive board recommended to put the Brisbane bid to a full vote in July.

AOC President John Coates says Brisbane 2032 now faces final scrutiny from the IOC members at the July 20 and 21 session ahead of the start of the Tokyo Games for its “date with destiny”.

According to an independent economic assessment released along with the IOC executive decision, the Games would deliver a total benefit of $8.1bn for Queensland and $17.61bn for Australia and create 91,600 years of full time equivalent jobs for Queensland.

“As we emerge from the economic setbacks of the Covid period, this is exactly the panacea Queensland and Australia needs. Economically, socially and for the health and wellbeing of the state and beyond,” Mr Coates who absented himself from the decision-making process during last night’s Executive Board meeting and previous considerations of the Brisbane proposition.

“The AOC is excited about the potential for a Brisbane 2032 Games to inspire participation in sport for a generation of children, including Aboriginal and Torres Strait Islanders.

“Australia is a sports-loving nation with an excellent track record in delivering major international events.

“Importantly, the Brisbane proposal is fully compliant with the IOC’s New Norm agenda to make hosting the Olympic Games affordable and to deliver long lasting value to the communities which host them.

“Events would be hosted in facilities already existing, planned or upgraded. These planned and upgraded facilities will deliver long-lasting value to Queensland’s sporting and community legacy and will be in use before the Games.

“Most importantly for Queensland and Australia, the Games will supercharge the sporting environment which is so critical for the health and wellbeing of future generations.”

Mr Coates said Queensland had worked hard to get to a vote.

“Frankly, the due diligence undertaken by the IOC’s Future Host Commission far exceeds that to which we were subject with our candidacy for Sydney 2000,” Mr Coates said.

“But it is the members we have to convince of the merits of our ambition to host the Summer Olympic Games for the third time. We have our date with destiny.

“Since entering the Targeted Dialogue phase in February this year, we have presented the IOC’s Future Host Commission with detailed responses to their questionnaire and held forums where we have addressed the issues, they have raised in relation to the Brisbane proposition,” Mr Coates said. 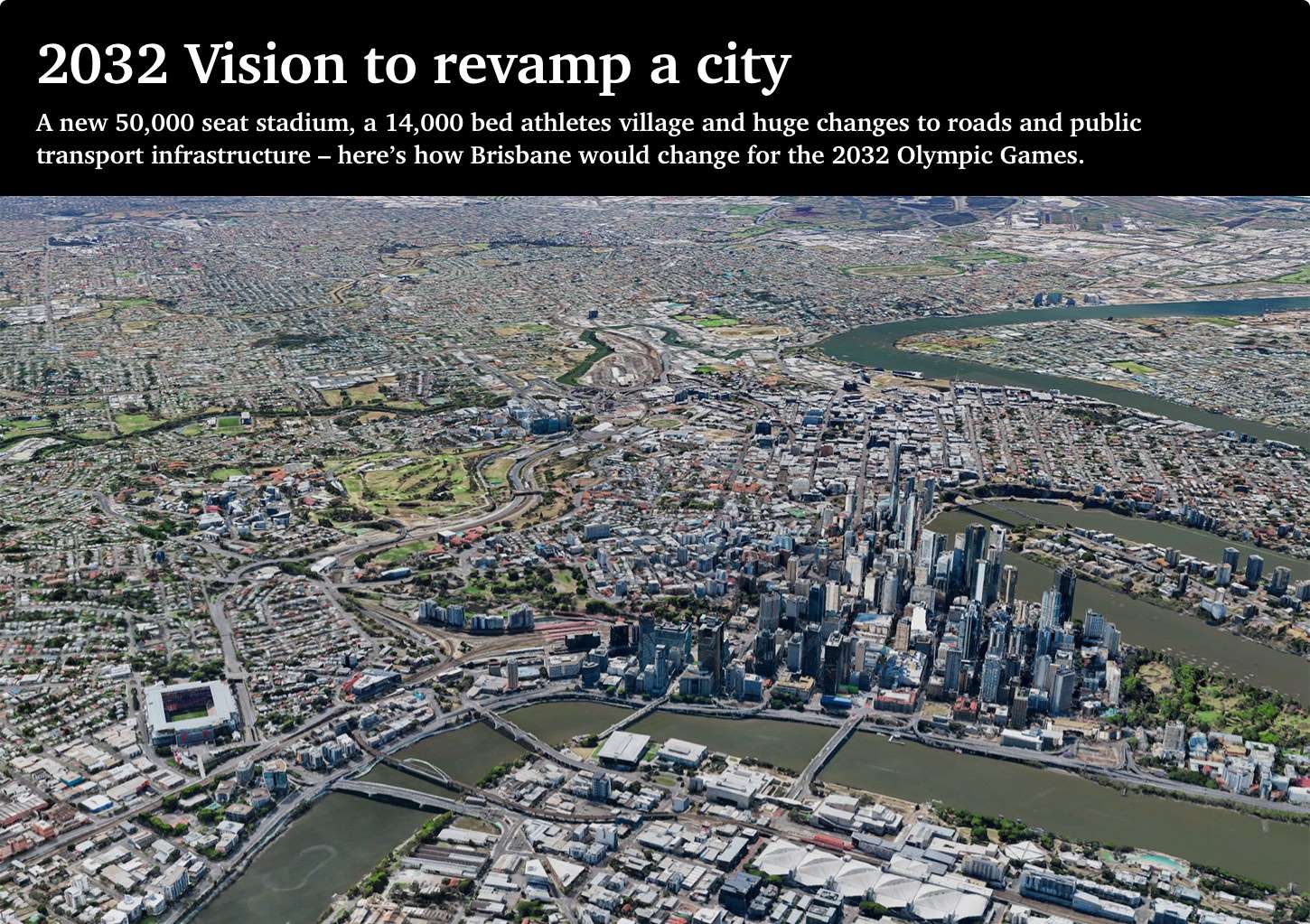 Announcing the decision to put the Brisbane bid to a full vote, the IOC also released documents that reveal the Queensland economy would receive an $8bn boost in the decades before and after the Games, as well as a whopping $3.6bn “feel good factor” from better transport, health and wellbeing changes brought on by the Games.

They also reveal the Games venues in previously unseen detail.

According to the venues masterplan, Brisbane, Ipswich, Moreton Bay, Scenic Rim and Redland along with the Gold Coast and Sunshine Coast will host 28 Olympic sports within 32 venues, with 16 sports and disciplines within 5km of the Brisbane central business district.

Across the three Greater Brisbane and coasts zones are seven venue clusters or precincts, which include “iconic beachfront, breathtaking rural hinterland and city centre locations”.

“This extends the Games hosting opportunity and benefits to key inland and coastal regional centres, while creating a statewide Games celebration,” the report says.

Along with the Gabba, the new Brisbane Arena would host the swimming, Victoria Park and the RNA could be used for equestrian events and Southbank for archery and 3 on 3 basketball.

Among others, the rowing would go to Wyaralong, sailing to Manly, kiteboarding to Alexandra Headland on the Sunshine Coast and beach volleyball to the Gold Coast.

“Queensland is renowned for its unique and spectacular locations and is one of Australia’s most popular tourist destinations,” the report says.

Among plans to show off Queensland are hosting outdoor sports that will “showcase the diverse natural environment, including beach volleyball at spectacular Broadbeach, Gold Coast, triathlon staged against the backdrop of the Gold Coast city skyline and beaches, road cycling marathon, race walks and kiteboarding at the picturesque Alexandra Headland coastal strip and Sunshine Coast hinterland, equestrian competition staged in the heart of central Brisbane, archery and basketball 3×3 on the banks of the Brisbane River against the city backdrop, iconic Brisbane Football Stadium, one of Australia’s premier rectangular stadiums, Wyaralong Dam, showcasing the spectacular Scenic Rim hinterland, Cairns and Townsville city centre stadiums, gateways to the Great Barrier Reef and Daintree Rainforest World Heritage Area.”

Included in the details are $85m for spectacular opening and closing ceremonies that are expected to reach well outside the revamped Gabba and $30m for the torch relay the length and breadth of Queensland.

To win the right to host the Games, Brisbane must convince a majority of the more than 100 IOC members that Brisbane is the best fit for the 2032 event.

In June 2019, The Courier-Mail and sister SEQ mastheads officially backed the bid with front page editorials and has continued to fuel the push for the 2032 Games and the billions of dollars and 100,000 jobs it promises for Queensland.

The SEQ Council of Mayors proposed a Games bid to fast-track public transport with a feasibility study which gathered momentum on the back of The Courier-Mail’s Future SEQ campaign that warned the southeast risked grinding to a halt as major roads hit peak congestion by the early 2030s as the population grew from 3.5m to 5.5m people.

“On behalf of the Australian Government, I thank the IOC’s Executive Board for their decision to allow our bid to go before the next IOC session,” Mr O’Brien said.

“I am delighted on one hand but nervous on the other,” Mr O’Brien. “I’m optimistic but very cautiously so.

“We’ve cleared the penultimate hurdle but there’s still one more to go, and we take absolutely nothing for granted.

“The International Olympic Committee has effectively reinvented its business model for hosting Olympic Games, called the ‘new norms’, and I can’t think of a safer pair of hands than Queensland to deliver the greatest Games the world has seen under this new model.

“We’re happy, but dare not celebrate nor tempt complacency because we haven’t crossed the finish line yet.

“These Games represent a massive opportunity for all of Queensland, not just Brisbane and the South East; the benefits will flow to the far reaches of our great state, all corners of Queensland will be touched by the Olympic spirit.”

Lord Mayor Adrian Schrinner said the proposal was the culmination of years of work by the Mayors and Councils of South East Queensland, together with proposal partners from the State and Federal Government and the Australian Olympic Committee and Paralympics Australia but said southeast Queensland needed more transport infrastructure.

“When we began this journey six years ago our focus was firmly on creating a positive legacy for our communities and to now be so close to realising that objective is a credit to all involved,” Cr Schrinner said.

“We know a 2032 Games can only succeed if the State and Federal Government deliver a significant investment in transport infrastructure and we will continue to advocate for these projects to ensure local mums and dads can spend more time at home and less time stuck in traffic.”

Sunshine Coast Council Mayor Mark Jamieson, who has been part of the 2032 Games push since March 2015 said the important milestone moved the region one step closer to being part of the world’s greatest event.

“We hope the vote will be positive, but we are prepared for all contingencies.

“If that future vote supports the Brisbane 2032 ambition, it will result in further detailed planning for key infrastructure that is needed to support the liveability and connectivity of south east Queensland, which is the fastest-growing region in Australia.

“In April, the Australian Government and the Queensland Government agreed to a 50/50 funding arrangement for the cost of infrastructure for the Games, which has provided great impetus for the proposal.

“Our key approach from Day 1 in 2015 – and one that has never changed – has been on securing the investment needed to support the communities of south east Queensland as they continue to grow.

“With this proposal, all partners have recognised that hosting the Games should provide a legacy 10 years before and 10 years after the Games events.

“From my personal perspective, my efforts over the last six years in supporting the Games proposal have been driven by a single objective – to secure the necessary and long overdue transport and infrastructure investment needed for our Sunshine Coast.

“Under the current proposal, Sunshine Coast is well positioned to potentially stage several events if the proposal is accepted by the IOC.”