Mondrian hotel to open on the Gold Coast in 2023

In a sign of confidence returning to the hospitality sector after COVID-19, accommodation giant Accor and Brisbane developer Chris Vitale will bring the renowned Mondrian hotel brand to Australia.

A 209-room hotel overlooking Burleigh Heads beach on the southern Gold Coast will open in mid-2023 as part of a $400-million project being undertaken by Mr Vitale and his wife Letitia’s Vitale Projects. 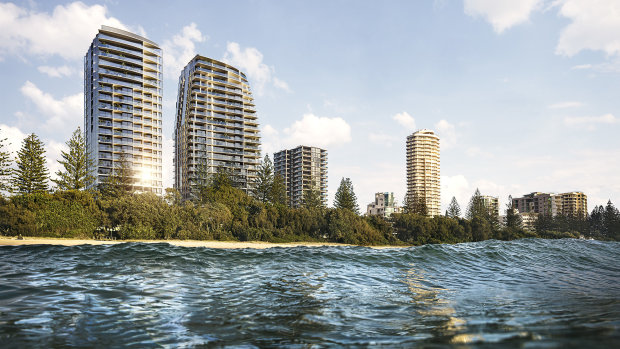 The Mondrian Hotel will occupy one of two towers being developed by Chris Vitale.

The 22-storey Mondrian Gold Coast will be developed on a 4037-square-metre site with 80 metres of ocean frontage and direct access to the beach. It is one of nine new Mondrian properties that the Los Angeles-based management company sbe – half-owned by hotels giant Accor – plans to open globally, including a hotel in London.

“As soon as the borders open, we expect to see an increase in domestic tourism,” Accor Pacific chief executive Simon McGrath said.

“We anticipate that domestic and international tourism will begin to normalise over the next few years.”

It is best known for innovative food and beverage offerings developed by its Disruptive Restaurant Group subsidiary, including Katsuya, Cleo, Hyde Kitchen + Cocktails and Umami Burger.

Alongside the hotel will be a residential tower with 89 Mondrian-branded apartments. The two buildings will sit above a three-level podium that includes a fitness centre, spa, restaurants, and swimming pools

Mr McGrath said the Mondrian brand, with its huge appeal and extraordinary food and beverage, would attract customers.

Records show Mr Vitale paid $22 million for the large site on the corner of First Avenue and The Esplanade at the end of July. It is currently home to a low-rise 1950s block of flat known as White Horse Apartments.

Mr Vitale said he and his wife would retain the hotel as an investment and they would move into an apartment in the Mondrian residential tower when completed in 2023.

“I’ve always loved Burleigh Heads and have long wanted to do a high-end hotel here,” he told The Australian Financial Review.

“There are a lot of hotels north of Broadbeach, but nowhere to stay on the southern Gold Coast. That’s what triggered this project.”

The project was independent of Pointcorp, the Brisbane development firm he co-founded with Paul Gedoun, he said.

“Vitale Projects is just myself and my wife,” Mr Vitale said.

Off-the-plans sales will kick-off this week with construction due to begin in May or June and take about two years to complete. The project received approval in July.

“We were seeking out hotel operators all around the world, but really did want the Mondrian brand which is suited to a location like Burleigh Heads,” Mr Vitale said.

“The opening of Mondrian Gold Coast is the next step in our strategic global expansion for the Mondrian brand,” he said.

Originally published HERE in the Financial Review by Larry Schlesinger.