Plans are picking up steam to connect the Gold Coast light rail to the airport and create a pedestrian “ocean-way” along Palm Beach.

Council and the state government are embarking on the $7 million joint venture to create a business case for the rail project aimed to boost the local economy.

The link will run along a 13-kilometre stretch of the Gold Coast Highway from Burleigh Heads to Coolangatta, in a development hotspot for residential apartments.

The state government also conducted community consultation on transport in the region which revealed a beach-side path, wildlife bridge at Burleigh Heads and the urban renewal of Palm Beach Avenue incorporating the tram line. 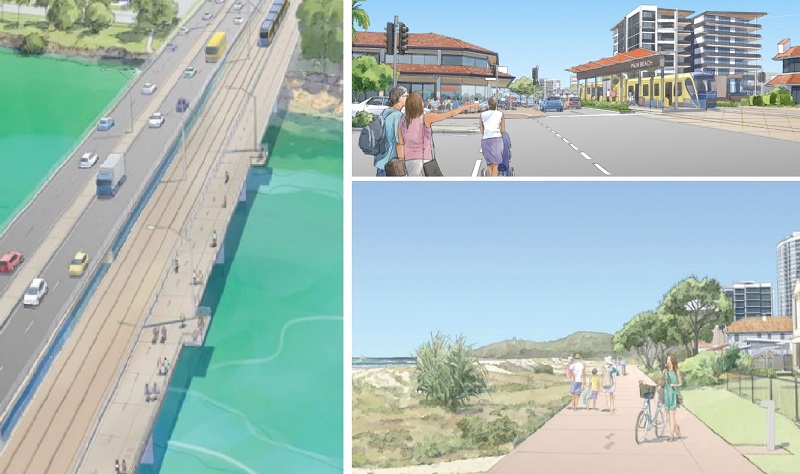 Artist’s impressions of transport options between Burleigh and Coolangatta including the Tallebudgera Creek crossing, pedestrian oceanway and a tram stop in Palm Beach.

Premier Annastacia Palaszczuk said the government planned to support the economy by making a number of major transport investments in the region.

“At the heart of that plan is a $50 billion guarantee to invest in large infrastructure projects that will support and sustain jobs for Queenslanders for years to come,” Palaszczuk said.

“We’re already doing that on the Gold Coast with the $1 billion M1 upgrade between Varsity Lakes to Tugun under way now.”

The contract for the Broadbeach to Burleigh rail link is expected to be awarded soon, and once stage 3 is finalised council hopes to immediately break ground on stage 4.

The final route of the light rail has been a source of contention between political parties.

Transport and Main Roads Minister Mark Bailey said it had been decided to keep the light rail closer to the beach as the heavy rail would run near the Pacific Motorway.

“The community understands the importance of preserving the option of future heavy rail to the airport, with 87 per cent of people in this survey backing that option,” Bailey said.

“We’re planning for a future light rail extension that actually takes locals and tourists where they want to go—to the beach, dining and retail centres and beachside accommodation, as well as connecting them to the airport.”