Designs by architecture firms Zaha Hadid Architects and Cox Architecture have been selected for the $5.3 billion ​Western Sydney Airport development in Badgerys Creek.

London-based Zaha Hadid and Australian firm Cox were selected from more than 40 entrants for the terminal precinct design competition, beating out Foster and Partners, Woods Bagot, and Architectus among others.

The brief for the mega-project, fully paid for by the Commonwealth after Sydney Airport turned down an option to build it, was to design an airport that pays tribute to the natural landforms, history and features of Greater Sydney.

The airport will be covered in greenery inspired by local flora unique to Western Sydney with vertical gardens, timber ceilings, shops, restaurants and even entertaining spaces.

A statue of Nancy Bird Walton—the pioneering Australian aviatrix the airport is officially named after— will feature in the building forecourt. 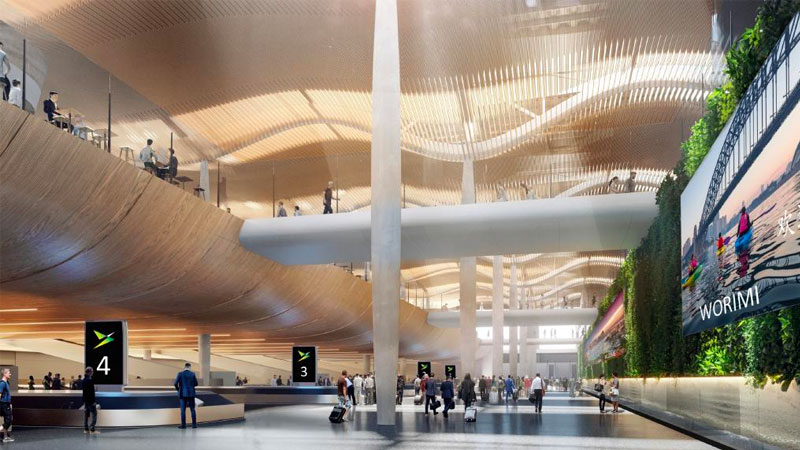 The winning design was chosen by a panel of Australian architects including Kim Crestani, Peter Poulet and Yvonne von Hartel AM.

“When passengers enter the terminal they will be immersed in a uniquely Western Sydney International experience with soaring timber ceilings and stunning vertical gardens designed to provide an inviting and relaxing start to their journey,” Western Sydney Airport chief executive Graham Millett said.

“The layout of the terminal will come together with technology and outstanding customer service to give passengers a reliable, fun and stress-free airport experience.”

Sustainability was another key criterion and the winning design stood out for its expansive use of passive design, taking advantage of natural airflows and lighting and efficient solar shading.

Competition applications were also encourage to “outline how they plan to involve university students with a link to Western Sydney” in producing their design.

“We’re pleased the architectural team has already engaged Western Sydney University students and local Dharug community members during the initial concept design development and we’ll now be working closely with key government, industry and community stakeholders as we further refine and enhance the concepts to arrive at a final design.”

Locals have still not been able to see the facility’s flight paths—which won’t be made available until 2021 for the airport which is is due to open in 2026.

Construction on the terminal is scheduled to start in 2022.

SHARE WITH A FRIEND BY CLICKING THE BELOW BUTTON